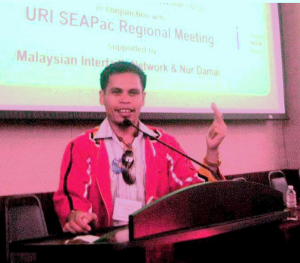 DATU LANELIO T. SANGCOAN- The President is belong to the Royal Blood of Higa-onon Tribe in the Philippines. He is the youngest Datu of the Tribe as equivalent to a Lawyer in profession. He is serving the tribes as a Founding President of the Internationally known Tribal People Led Non Government Organization which is EMPOWERING THE TRIBES FOR DEVELOPMENT  based in the Philippines.

EMPOWERING THE TRIBES FOR DEVELOPMENT  was HIGA-ONON HA MIGSABUWA TA LANAO,INC. before, and it was ammended due to the massive demand of the Tribal People of Mindanao which were not given any attention by the Government for development. The organization was ammended with a purpose to help address problems in the cultural communities that leads to the empowerment for the entire development of the Tribal needy people. The existence of the organization is almost 7 years in service towards the tribal communities. It had been conducted many projects in partnership with foreign donors.

EMPOWERING THE TRIBES FOR DEVELOPMENT   ., was created through the effort of the tribal leaders, chieftains and elders of the Tribes. This organization was formed and organized just because of the failures and neglects of the local government to support the Tribal Peoples Community. By the virtue of Republic Act 8371, the proponent organization was made and given all the rights and privileges.

The proponent Organization was a Tribal Peoples Led Non Government organization based in Mindanao Island in Philippines where the bulk of the tribal people found and exist. It was founded on March 01, 2006 and registered soon to the Securities and Exchange Commission on October 26, 2007.  Its leadership and membership is composed solely of indigenous people.  It has since conducted joint projects with various civil society organizations, local government units and the Department of Education.

The organization was duly recognized as a member of the Southeast Asia-Pacific Cooperation Circle of the United Religions Initiative of the 120 countries around the world on August 24, 2009.  And recognized by the United Nations Civil Societies organization Network as Indigenous Peoples Non Government Organization in the Philippines.

EMPOWERING THE TRIBES FOR DEVELOPMENT  envisions to:

We envision a community where  peoples regardless of gender, races, beliefs, cultures and status, lead a healthy and peaceful life, working together to pursue democratic and participatory management of our economic, political, cultural well being and responsibility nurturing our environmental resources to contribute to both local and national efforts towards sustainable peace and development.

Through its mission, EMPOWERING THE TRIBES FOR DEVELOPMENT  has owed to:

Empower the women and men of the Indigenous Peoples Communities of Mindanao; rehabilitate and protect the environment; promote their rights to self determination, intercultural appreciation and respect; ensure the self governance, and ownership of the  Indigenous peoples Ancestral Domain lands; respect their culture and tradition; ensure equal treatment of the community and participation on the involvement of men and women in implementing sustainable integrated area development and ensure equal access to and control of its corresponding resources and activities.